I had a very amusing travel experience right at the start of this journey at security in Vancouver.  A lot of people these days – myself included – use their phone as a boarding pass rather than a paper copy.  At international security at YVR I was instructed by the security officers to, “hold onto your boarding pass even if it is on your phone” before going through the metal detectors.  As I approached the metal detector the officer said “you need to put your phone in a bin for the x-ray” to which I replied “my boarding pass is on my phone”, and showed it to him.  He said it had to go into a bin, so I obliged.  About 6 seconds had gone by, and as I was waved through the metal detector by the same officer who told me to put my phone in a bin, but before I went through he said “where’s your boarding pass? I need to see your boarding pass”.  I saw this happen to two other travellers, so I’m not sure if the officers were just messing with everyone, or were just very bad at communicating with people.

The journey from Vancouver to Imst took 15 hours total and involved 2 planes, a train, a bus, and a really bad cab driver who almost caused 2 accidents.  I’m not sure if they have hands free laws in Austria, but they should.

I’m staying at the cozy Hotel Neuner until the start of TTA on Sunday, and didn’t venture very far from the hotel after arriving yesterday afternoon.  After getting settled and putting my bike back together (which arrived without any issue) I enjoyed a pizza and beer from the on site pizzeria before heading straight to bed.  I kind of enjoy the jetlag coming from North America, as it was really easy to get up at 3:00am this morning.  I’m sure I’ll get on a regular schedule after tonight’s rest.

It’s approaching 6:30am, so off to breakfast and then out on the bike to explore the Kühtai – the first mountain pass on stage 1 this year.  The forecast is for 31 and sunny today, so I’ll be sharpening my tan lines!  Pictures to come after today’s exploring.

View from Flight into Innsbruck

This morning I set out on the same route I’ll be taking on Sunday with 1000 other cyclists.  It will be nice to have a somewhat closed course, as the first 15km was along highway-style roads with no shoulder.  The climb up Kühtai is 18km with about 1250m of elevation gain.  There were some steep 15%+ grades, but the weather was perfect and the scenery was breathtaking!  There were some flatish sections though little villages along the way where I had to avoid several cows just wandering in the middle of the road.  When I reached the top the temperature quickly soared to almost 30 degrees, but the descent required a wind vest as the temps dropped right down to half that in the forest.  The descent was fast and fun, although I had to maneuver my way through a mine field of 45cm cow patties lurking in the shadows around a few blind corners.  I stopped at several viewpoints along the way to take photos, including  a panorama taken at the church in Oetz.  It was here that I dropped my chain (shifted while pedalling too slow), and ended up with greasy fingers.  I grabbed a bunch of grass to wipe them off, but did not realize that I had also grabbed a bunch of stinging nettle, or some sort of related plant.  My fingers still hurt now as I ended up rubbing tons of tiny sharp barbs into my skin.

As I made my way back into Imst I did a bit of exploring in the centre of town.  I remembered riding these roads last year when hundreds of school children lined the streets to cheer us on as we left the city on stage 2 of TTA 2015. 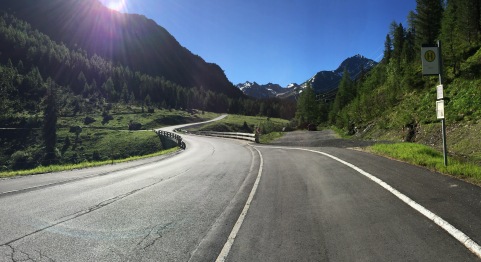 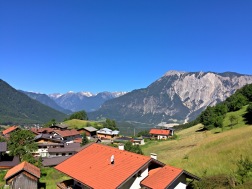 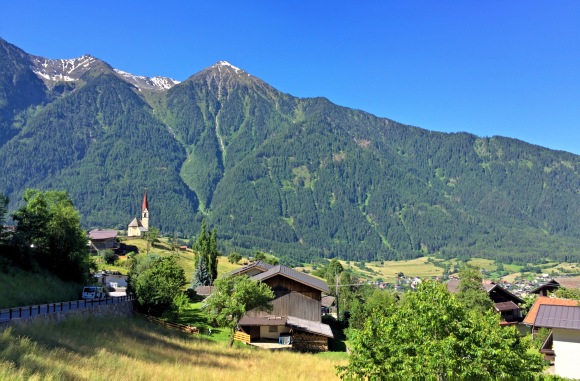 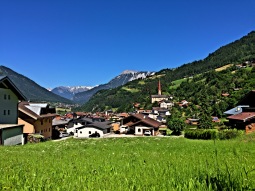 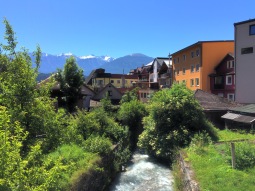 Did I mention it was hot?  Check out the picture of the time/temperature sign below.  At 5:17pm it was 41 degrees C – that’s 106 degrees F for my US readers!

Joerg arrived yesterday after a nice 15 hour travel day, and we planned a ride up Kühtai today so he could get a feel of the first climb of this years tour.  After some technical difficulties involving a sheared brake cable screw we left for our ride at about 10:30am.  By that time it was already 25 degrees, and the day became hotter and hotter.  The summit was bathed in sunshine (again), and the 30 degree heat made us both crave an ice cold Coca Cola.

Once we began descending it was apparent that the day had become even hotter, as it felt like we were in a giant hair dryer.  My Garmin showed 38 degrees once we reached the valley making the long uphill grind back to Imst quite gruelling.  All in all it was a good day, and both of us feel in good form for Sunday.  Now it’s time for a großes weissbeer! 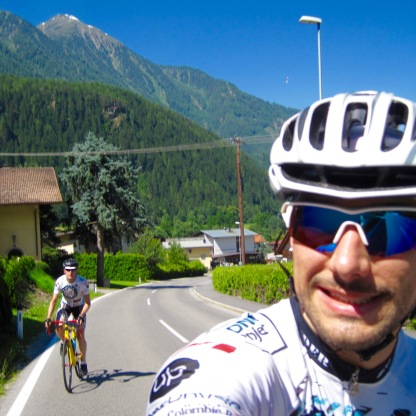 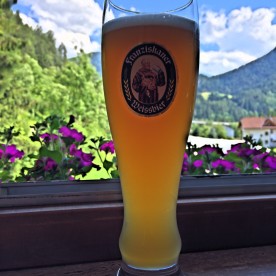 Thunderstorms ripped through the town yesterday, flooding the local river.  The lightening was spectacular, illuminating the sky for about an hour.  Below is a photo from around 9:00pm just before the storm hit, and the other is from 9:00am this morning.  There are more storms in the forecast for this afternoon…

We picked up our race packages today, and got everything ready for the big ride just before a torrential downpour.  Unfortunately tomorrow’s kit includes long sleeve jersey, rain booties, rain jacket & rain cap.  The forecast is for 14 degrees with rain, and only 9 degrees on the Kühtai summit.  I’m quite nervous about the descent, as I’m worried I’ll get to a shivering cold state.  The entire descent is about 30km, and in the wet on unknown terrain it will not be as fast.  I’m hoping it will not take any longer than 45 minutes, and that the weather warms up as we reach the valley below.  Other than that I’m actually looking forward to climbing Kühtai in colder temperatures, and not melting on the way up as I did the last few days.

I’m brining my little point and shoot camera with me, but I doubt there will be many pictures as it will be difficult to pull it out with a rain jacket as a top layer.

Although I’m really excited to start this ride, I feel like I just want to get the day over with.  I’m hoping the rain in the forecast is no more than passing showers, and that we get some dry-ish roads.  I’m not particularly keen on riding in the rain with a bunch of people who I have never met before, and am unfamiliar with their riding styles.  I will be extremely cautions tomorrow, so the 157km ride will probably take a bit more time than I initially expected.  Let’s get this show on the road!

Next update from Brixen!